The PowerPoint of the Prodigal Son 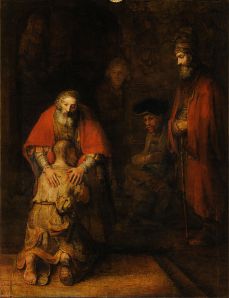 “Return of the Prodigal Son” by Rembrandt van Rijn

Sometimes the truth has to be dissected to be understood. But big truths don’t get communicated that way — they are best viewed and absorbed as a whole picture.

That’s why art works. That’s how art works. And I think that’s why Jesus so often used stories to illustrate, in woven verbal displays, the reality of who God the Father is.

Instead of breaking down the truth into a series of boiled-down bullet points, Jesus told stories that illustrated God’s reality in deeper (and truer) fashion than the PowerPoint-style presentations that so many people have come to prefer when it comes to studying God and the Bible.

Take, for example, the Parable of the Prodigal Son. In Luke 15:11-32, Jesus tells the story of three men: A younger son, at first deluded by selfish desire but later humbled into repentance; an older son, indignant in his self-righteousness and unwilling to forgive his younger brother’s sins; and a father, whose despite getting supremely insulted by the younger son rushes to embrace him upon his return home. It is perhaps Jesus’s most famous parable; and outside of the cross, it is his most poignant illustration of just how deep God’s love and mercy are. It is brilliant, it is nuanced, and in 22 verses vibrantly captures the beauty of the Father’s character.

But just imagine Jesus sitting down and scratching a list of bullet points in the dirt to communicate the same truths:

Jesus could have taught us this way. It certainly would have been more efficient when he was instructing men who sometimes had trouble grasping even basic concepts. Pastors and teachers make those kinds of lists today because it’s their job to explain scripture to people — but those lists shouldn’t take the place of the original stories. The bullet points are the take-aways. They aren’t the whole meal.

I love gazing at paintings like the one shown here. They invite you into the scene. Great stories, great poetry and great art of all kinds do the same thing. They invite you to stop and ponder and absorb. Only by doing that can you even begin to receive the full experience of God’s beauty.