The Power of Being Invisible

Book recommendation: “Invisibles: The Power of Anonymous Work in an Age of Relentless Self-Promotion,” by David Zweig. 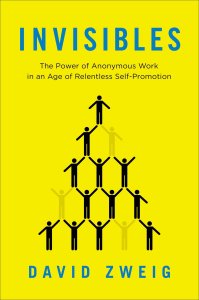 I’m just starting this one, but the title alone sold it for me. In his introduction, Zweig writes:

“… I was fascinated by people who chose to do work that required extensive training and expertise, that was critical to whatever enterprise they were a part of, yet knowingly and contentedly, they rarely, if ever, were known by, let alone received credit from, the outside world for their labor. What makes Invisibles so captivating is that they are achieving enviable levels of fulfillment from their work, yet their approach is near antithetical to that of our culture at large.”

The idea of doing important, meaningful work without receiving any notoriety runs against a culture where even the most mundane daily tasks get posted on social media for audience approval.

Two points come to mind as they relate to journalism.

Everyone has a story. The biggest sense of fulfillment I get as a journalist is to listen to someone’s story and then retell it, for the first time, in words, photos or video.

All while remaining invisible and letting God get the applause.

This entry was posted in Reporting and tagged humility, journalism, story. Bookmark the permalink.