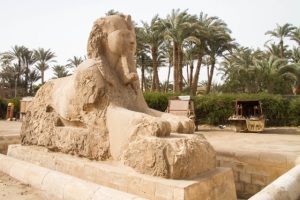 Walking through the ancient remains of Memphis, Egypt, last week provided a solid reminder of just how important on-site documentation is for the preservation of history.

The sphinx shown at left is a well-preserved artifact of ancient Egypt — one of the best outside of King Tut’s tomb, in fact. There’s one small problem: Nobody knows who this depicts. Could be any one of the ancient kings of that era. We do know that the statue was carved after this pharaoh died, because his beard is curled at the end (unlike some of the straight-bearded statues of Ramses II at the same museum site). It would have taken very little time for an eyewitness to engrave the name somewhere on the statue. Alas, the historical record remains incomplete.

I’m really glad the Bible isn’t like that. I was reading Acts today, and was hit afresh with just how beautifully articulate and accurate Luke’s reportage is.

In Chapter 27, Paul and Luke and perhaps some others are in a ship headed for Rome when they get swept into a bad storm called a northeaster. In Verse 18, it says, “Since we were violently storm-tossed, they began the next day to jettison the cargo. And on the third day they three the ship’s taking overboard with their own hands. When neither sun nor stars appeared for many days, and no small tempest lay on us, all hope of our being saved was at last abandoned.”

What detail! What splendid writing! And why should we care? Because it reveals that Acts, as with almost all of the Bible’s historical documentation, is the work of first-hand reporting done by people watching the action unfold themselves.

Luke’s depiction of life at sea in the first century gibes with other sources from that era. And by making it clear that he was there, recording the dialogue and the details and the people involved, he lends enormous credibility to his story.

That’s what great reporting does. It carefully details what happens, where, when and to whom, and then lays the details out in a narrative that seizes the imagination of its readers. That’s great documentation. That’s great storytelling. Though we know our work falls short of canon scripture, we love it that our job is to report God’s work as it unfolds today, aspiring to that same level of craftsmanship. Striving for anything less would be an injustice to God and to history.

This entry was posted in Reporting and tagged egypt, history, truth. Bookmark the permalink.
%d bloggers like this: