“Liars.” That was the description we heard in Egypt of journalists from CNN and Al-Jazeera, among other news agencies covering the country.

CNN is disliked in Egypt for reporting lines like this: “Morsi, Egypt’s first democratically elected president, had been toppled in a military coup in July 2013.” 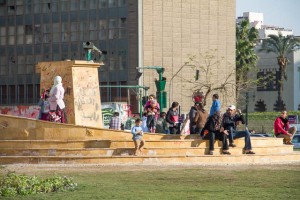 Well, sort of. That oversimplifies and distorts a people’s revolution that the army simply supported and carried out to prevent huge bloodshed. People who sympathized with the second revolution – and that’s an overwhelming majority of Egyptians – see CNN’s wording as a sign of sympathy with the Muslim Brotherhood. They believe that all news coming out of Egypt is vetted by the MB and spun in that direction. Western journalists are viewed as either complicit plotters or unsuspecting dupes.

I’m not in a position to say whether that’s correct or not. Typically in America, people quickly assign bias when what we’re really seeing is lazy, underinformed reporting. I can say, though, that recent actions of Egypt’s interim government do not represent a step toward a free and open society. The arrest of three Al-Jazeera journalists on terrorism charges – they are accused of “spreading lies” and working in alliance with the Muslim Brotherhood – is frightening. Basically, they have been imprisoned because the government thinks they are biased. That smacks of the Soviet-style imprisonment of dissidents. No free country – and that’s what Egypt aspires to be – imprisons journalists for their points of view. (Nor does it order the executions of 529 people after a sham trial, no matter which terrorist organization they may sympathize with.)

Much as American Democrats disdain Fox News or Republicans vilify just about everyone else, the only thing risked by political journalists in the U.S. is loss of credibility and audience. It makes me crazy when I hear otherwise-bright people on either end of the political spectrum talk about how they wish their demonized news source could be shut down. I hope Egyptians don’t take cues from short-sighted reactionaries on America’s left or right.

Thomas Jefferson said: “Were it left to me to decide whether we should have a government without newspapers, or newspapers without a government, I should not hesitate a moment to prefer the latter.”

And if you think the U.S. news media are biased today, read some newspapers from the 18th and 19th centuries.

With Egypt, I get it. This is uncharted territory and they are figuring things out as they go. The crackdowns, I think, represent a heated overreaction to Egyptians’ newfound disdain for the MB. Things need to calm down, and there’s reason to believe they will. By most accounts, next month’s presidential election should help bring stability.

Egyptians we talked with agreed that the country’s new constitution needs a few tweaks – particularly in limiting the powers granted to the army.  On the good side, it renders freedom of belief as absolute (not just “protected”) and gives encouraging nods to free expression and free press.

Time will tell just how serious those are.