At the heart of Luke’s gospel – after Jesus feeds the 5,000, heals many, raises Lazarus from the dead and calms a stormy sea  – lies the central question of all history: Who is this man? Luke builds the suspense and curiosity in chapters 8 and 9, finally using a quote from Peter to reveal Jesus’ identity: “You are the Messiah, sent from God!”

“Who is this?” is a question every journalist should ask when composing a story about a person. It’s the heart of every good profile. And then, the real art is to reveal the answer not in statements, but in stories and dialogue. Give readers enough clues to figure it out for themselves. Give them the opportunity for the light bulb to go on in their own heads.

One of the best magazine stories I’ve ever read was by Gary Smith in the March 5, 2001 issue of Sports Illustrated. “Higher Education” was about an enigmatic high school basketball coach who left a community dumbstruck. In fact, Smith even employed the phrase, “Who was this man?”

This is a story about a man, and a place where magic happened. It was magic so powerful that the people there can’t stop going back over it, trying to figure out who the man was and what happened right in front of their eyes, and how it’ll change the time left to them on earth. 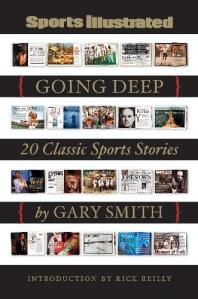 That paragraph could preface one of the gospels. It hints at some of the story’s central themes: selflessness, reconciliation, community, growth, and an almost-messianic figure.Perry Reese Jr. was a black Roman Catholic, hired to coach basketball in the all-white Amish community of Berlin, Ohio, in the 1980s and ’90s. It won’t give away too much to tell you that Reese died of brain cancer and that Smith’s incredible story is an 8,500-word answer to the questions, “What just happened back there? Who was this man?”

Good journalists learn to find significance in the unusual or the unexpected. A black outsider coming to an Amish town to coach basketball is about as expected as … well, as the Son of God being born in a stable. Surprises can turn into powerful stories.

To write a story about a man he never met, Smith went to Ohio and interviewed eyewitnesses. He gathered anecdote after anecdote, detail after detail. He created a story so powerful that, 13 years after I first read it, I still get bowled over by its final paragraphs.

Go read it, and other stories by Smith, if you want to see the power of great storytelling. And feel a little sad that Smith is retiring as a magazine writer, after decades writing for Sports Illustrated, Life, Esquire and others. This Sports Illustrated column by S.L. Price pays tribute to the best magazine writer of our time – and provides links to some of his greatest work.

This entry was posted in Faith, Reporting, Writing and tagged gospel, interviewing, reporting, stories, storytelling, writing. Bookmark the permalink.
%d bloggers like this: